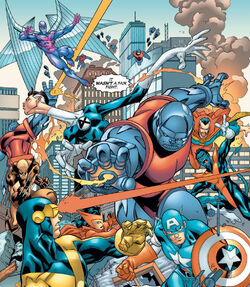 Major Mapleleaf's effort to change the past by convincing James MacDonald Hudson not to go to New York (into Omega Flight's ambush) led Jaxon to mass produce the Box robots, defeat Omega Flight (and kill Flashback), and eventually go insane from the strain of controlling the robots; the Box robots are left with his last directive for vengeance, slaughtering the heroes of America and then Canada.[1]

Like this? Let us know!
Retrieved from "https://marvel.fandom.com/wiki/Earth-5019?oldid=5530560"
Community content is available under CC-BY-SA unless otherwise noted.