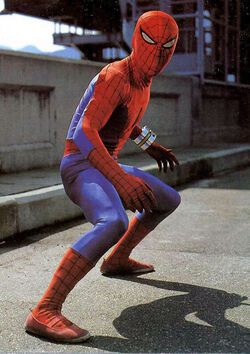 One afternoon, a young motorcycle racer named Takuya Yamashiro sees what he believes to be an UFO crash to Earth. In reality, what he sees is the Marveller, a warship carrying the final survivors from the planet Spider, who have crashed to Earth while fleeing from Professor Monster and his Iron Cross Army, a group planning to rule the universe.

When Takuya's father Hiroshi, a space archaeologist, travels to the crash site to investigate the ship, Takuya follows him. But upon discovering the ship, Hiroshi is killed by the Iron Cross Army. Entering the ship, Takuya finds the last dying survivor of Spider. The man gives Takuya the Spider Bracelet, a device that, when activated, endows the wearer with the powers of a spider. The bracelet also allows the wearer to control the Marveller, including transforming it into a giant robot dubbed "Leopardon". Takuya takes the bracelet, and vows to use the new powers to defend the planet from the Iron Cross Army, as well as other threats, under the code name of Spider-Man.[1]

Like this? Let us know!
Retrieved from "https://marvel.fandom.com/wiki/Earth-51778?oldid=5599539"
Community content is available under CC-BY-SA unless otherwise noted.