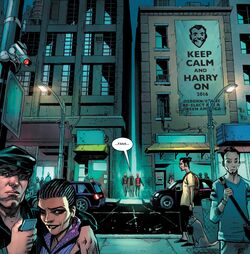 In an attempt to stop the ongoing Vedomi invasion occurring in his timeline, the Prime Marvel Universe's Spider-Man, Teresa Durand and J. Jonah Jameson decided to travel back in time in hopes to retrieve the Tinkerer's notes on how to fend off the alien attackers, since they had been lost when his lab was burned down a decade earlier. While making use of Iron Man's Time Platform, Doom warned Spider-Man that due to wild misuse and tampering of the timelines and infractions with the Time Variance Authority, the machine had been altered so that it would outright transport him to a different timeline altogether.

Since he figured any action he took in this world's past wouldn't have consequences in his present, Spider-Man decided to meet his younger self and assist him in neutralizing his greatest foes, hoping to spare his younger self of the bad things that would happen in his life. After foiling one of the Green Goblin's plans and exposing his secret identity, the villain dosed himself with more of the Goblin Formula. In the meantime, Jameson sought help from his past self to find the Tinkerer and in the process told him that Peter Parker was Spider-Man.[1] When the Green Goblin attacked Jameson for publishing news about his identity, he caught a glimpse of a headline draft exposing Peter's identity.[2] Osborn captured both Peter and his Aunt May, but they were both rescued by Peter's future self. In the aftermath, the time-travellers departed to their own time, and Peter quit being Spider-Man.[3]

As a result of giving up on being Spider-Man, Peter had a very successful career as an inventor. He founded Parker Industries and married Gwen Stacy. In the meantime, Norman Osborn had been reformed, and backed his son Harry in politics. The Osborns' control over the media and the people resulted in a totalitarian system, with only a handful of heroes left to fight against it. Peter decided to avoid antagonizing the system, instead focusing on making low-cost technology for the world. On the other hand, Gwen tried to help the Resistance in every way she could.

When Spider-Man, Teresa and Jameson left this timeline's past, they were transported to it's present instead of their own. Spider-Man sought help from his native self from this reality, but he refused to assist them. Gwen Stacy directed them to the Resistance and Spider-Man and his allies broke Doctor Doom out of prison with their help.[4] The Resistance then took Doctor Doom to a Oscorp warehouse where his Time-Platform had been confiscated so he could set it up, but they were quickly surrounded by Osborn's forces. Gwen Stacy assisted the Resistance, and she was quickly joined by her husband, who had decided to return to being Spider-Man after she had called him out on his cowardice earlier. In the middle of the fight, Captain America was shot and fatally injured by Kraven the Hunter, but clinged to life. Following the defeat of his army, Osborn fled. Spider-Man, Teresa and Jameson returned to their timeline with the assurance that Peter was going to continue fighting against Osborn.[5]

Spider-Man eventually defeated Osborn, but his achievements became a blip in the history of the Earth. Five billion years passed, and the Sun approached it's final moments. One of the beings to witness the end of the Earth was Sandman, who had long ago discovered he was immortal.[6] When the time came, Sandman took advantage of the interdimensional rift caused by the Spider-Man of the Prime Universe when he travelled through Earth-51838 to beam his consciousness into the Prime Universe and take control of his past self's body. Before the eternal Sandman could completely take-over his younger self, the Human Torch helped Spider-Man and used the Multisect to seal the rift, sending Marko back to future, and was left floating in the void of space.[7]

Like this? Let us know!
Retrieved from "https://marvel.fandom.com/wiki/Earth-51838?oldid=5873514"
Community content is available under CC-BY-SA unless otherwise noted.