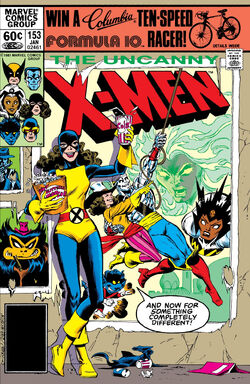 Now I know how Alice felt when she fell down the rabbit hole.

"Kitty's Fairy Tale". Kitty Pride tried to tell Illyana Rasputin a Fairy Tale based off on the X-Men and their exploits, unaware that she was actually tapping into an existing alternate reality for inspiration.

Several years ago on Earth-616, Kitty Pryde told a bedtime story to young Illyana Rasputin. Her story involved an adventurous far-off land populated by strange creatures and characters inspired by her own teammates – the X-Men. What Kitty didn't realize at the time however, was that she was in fact subconsciously creating her own alien dimension wherein these characters truly existed.

Years later, the X-Man known as Nightcrawler arrived in this enchanted land after several mishaps involving the Well at the Center of Time. He met the Bamfs – a race of creature with characteristics similar to his own, as well as pirate versions of his teammates, Kitty Pryde and Colossus.

Environment: Similar to Earth during the midevil period
Usual Means Of Access: Well at the Center of Time
Dominant Lifeform: Humanoids, Bamfs and Pinis

Like this? Let us know!
Retrieved from "https://marvel.fandom.com/wiki/Earth-5311?oldid=4508959"
Community content is available under CC-BY-SA unless otherwise noted.