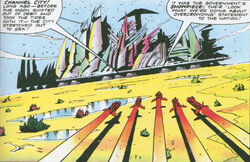 By the 82nd century, the world's orbit was moving ever closer to the sun, the seas were drying, the animals were dying,[1] and the moon has shifted out of orbit severely affecting the tides. Early 8120s brought severe droughts.[2] Fresh fruit, vegetables,[1] and livestock[2] are highly priced commodities, unlike slaves.[1] Those who could afford it left the Earth on interstellar ships for other worlds.[3]

To curb civil unrest, at some point no later than 8148, the World Development Council (W.D.C.) established gladiatorial combat called the Game.[1]

Following the deaths of 153 civilians in a playoff game, the Game was cancelled in 8158. The W.D.C. formed National Union of Retired Sports Experts (N.U.R.S.E.) to provide ex-Game players with work.[1] Due to N.U.R.S.E. being headed by the corrupt Matron, who ran a protection racket on the ex-Gamers, many of the former gladiators rebelled.[3] In 8162, N.U.R.S.E. brought back Dragon's Claws, the best Game team, to serve as its enforcers.[1]

Eventually Dragon's Claws joined forces with their rival Gamers, the psychotic Evil Dead to defeat the corrupt Matron. This resulted in the dissolution of N.U.R.S.E. Dragon's Claws continued to work as government enforcers, though under the W.D.C.[3]

The Doctor sent Death's Head to year 8162.[4] After a couple of runs in with Dragon's Claws,[5][6] Death's Head moved to the Los Angeles Resettlement[7] and worked there as a freelance peacekeeping agent until Josiah W. Dogbolter hired him to use an experimental time machine to kill the Doctor.[8]

Around 8136, a new North-South Border was introduced between England and Northern England. This and high unemployment caused massive riots. The W.D.C. used what was often described as excessive violence to quell the uprising. This created an anarchic plague-ridden wasteland that became known as the 'Pool.[5] By the 8150s, the country was called Greater Britain.[1]

In 8150, power in France was divided between the country's barons. This led to constant land disputes among them, threatening an economic collapse of the country. A rebel organization La Folie was created to put a stop to it.[9]

Like this? Let us know!
Retrieved from "https://marvel.fandom.com/wiki/Earth-5555?oldid=5967992"
Community content is available under CC-BY-SA unless otherwise noted.