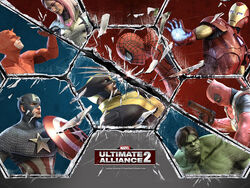 A few years later the Civil War took place, leading to the rising of a faction known as the Fold which almost took over the world. However, the Ultimate Alliance reunited again and after a lengthy battle, it managed to stop the Fold.[2]

Like this? Let us know!
Retrieved from "https://marvel.fandom.com/wiki/Earth-6109?oldid=6082539"
Community content is available under CC-BY-SA unless otherwise noted.