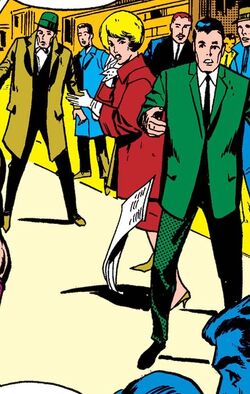 Earth-689 is a divergent timeline created as a plot orchestrated by the Scarlet Centurion (formerly Rama-Tut) to take over the 20th Century. He reasoned that if he pitted the time-displaced Avengers against a version of the original team, he'd be able to swiftly dispose of them once and for all.

Following their battle with the duplicitous Space Phantom,[1] the Centurion offered the still-united Avengers of Earth-689 knowledge of the future so that they could rid the world of famine, plague, and pestilence, bringing about a golden era of peace. However, the Centurion cautioned that superhumans were the main cause of the world's problems.

Accepting pursuance of their new goal at face value, the Avengers captured all their fellow heroes, starting with the Fantastic Four, then Spider-Man, the X-Men, Sub-Mariner, Daredevil, and Doctor Strange. They prevented SHIELD from forming by incarcerating its founding members. With the world's heroes neutralized, the Avengers then took down every known super-villain; the combined efforts of Dr. Doom, Electro, the Mandarin, and Dr. Octopus unable to stop the them. After all the super-powered beings on Earth were defeated, they turned the world into a dictatorship under their complete control, ordering the halt of all atomic tests in an attempt to curb the advent of new super-beings.

The Scarlet Centurion transported Avengers of Earth-616 to this reality and led the Earth-689 Avengers to believe these new arrivals were the evil beings whose coming he had once foretold. The Earth-616 Avengers set out to correct the divergence they made in time using Doctor Doom's Time Platform.[2] Defeating the Centurion, the Avengers sent him to the year 4000 where he became Kang the Conqueror. The Earth-616 Avengers then re-materialized in Doctor Doom's Castle in their own reality, with no memory of the events that had just transpired.

Like this? Let us know!
Retrieved from "https://marvel.fandom.com/wiki/Earth-689?oldid=6447456"
Community content is available under CC-BY-SA unless otherwise noted.