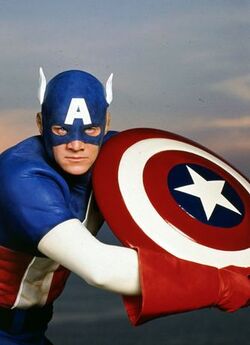 When loyal all-American Steven Rogers was excluded from the World War II draft due to polio, he volunteered for a top secret government program testing a "Super Serum". The serum elevated Rogers to the peak of human perfection, and he took up the mantle of Captain America.

During a battle with his new arch nemesis Tadzio de Santis, otherwise known as The Red Skull, Rogers ended up frozen in the Alaskan tundra until he was thawed out in 1990. Rogers then caught up on history, and learned that de Santis was now the head of an Italian crime family, intent on assassinating the President of the United States, Thomas Kimball. Rogers and de Santis engaged in a battle, only for de Santis to pull out a detonation device for an unseen explosive. Rogers used quick thinking to distract de Santis, giving him enough time to knock de Santis off the edge of a cliff to his implied death.[1]

Like this? Let us know!
Retrieved from "https://marvel.fandom.com/wiki/Earth-697064?oldid=6081079"
Community content is available under CC-BY-SA unless otherwise noted.