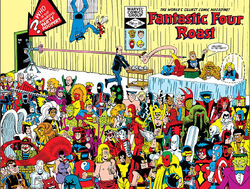 Oh, and if you're one of those folks who takes his Marvel Universe continuity seriously --and after all, who doesn't-- I'd advise you not to put too much stock in the following tale. After all, are you going to believe a guy who'll rewrite Doctor Doom's origin for the sake of a cheap joke? It was either laughs or continuity, so continuity went out the window. Hopefully, there'll be enough laughs to compensate!

A comedic look at the Marvel Universe as created by Fred Hembeck.

Like this? Let us know!
Retrieved from "https://marvel.fandom.com/wiki/Earth-77640?oldid=6549634"
Community content is available under CC-BY-SA unless otherwise noted.