What If Rick Jones Became the Hulk? 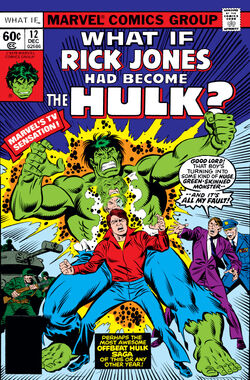 The history of Earth-7812 would mirror that of Earth-616 until the day of the Gamma bomb test in the New Mexico desert. In this reality when Bruce Banner would attempt to push young Rick Jones into the safety trench, Rick would toss Banner to safety instead and would receive the full brunt of the gamma explosion. That night, when Banner would bring Rick to the infirmary at the military base, Rick would transform into the powerful Hulk. The wise-talking Hulkster would go on a rampage prompting General Ross to try to hunt down the monster. Guilt stricken, Bruce Banner would track Rick down and to his surprise when the sun would rise the following morning Rick would revert back to normal. Constructing a containment room in a secret lab, Bruce Banner would toil to find a cure for Rick's condition, sealing him in the room during his nightly transformations as the Hulk.

When Banner would build a device that would allow Rick to control his transformations into the Hulk, the boy would be manipulated by the Norse god of mischief Loki, forcing him to transform into the Hulk. When Banner would attempt to use his device to change Rick back to normal, Loki would force Rick to remain as the Hulk, who would destroy the device. Loki would then trick the Hulk into smashing a railway bridge, leading to the union of Iron Man, Giant-Man, Wasp, Hulk and Thor into forming the Avengers.

Banner meanwhile would repair his device, and following the Avengers battle against the Space Phantom leading to the Avengers attempting to try and contain the Hulk, Banner would blast him with his device seemingly curing Rick of his condition. Sometime later, Rick would come across Captain America battling agents of Hydra and would lend a helping hand, convincing Captain America. Impressed by the young boys fighting abilities, Captain America would take him under his wing and train him to be the next Bucky. However on their first mission battling Hydra, the excitement of battle would cause Rick to transform into the Hulk once more. Seeing the Hulk was out of control, Captain America would attempt to talk him out of killing any of the Hydra agents, the shamed Hulk would then flee the scene.

Later still, Rick would be tricked by the Captain Marvel to the location of his Nega-Bands, bonding the two heroes together. The first time Rick would clash his bands together he would be transported to the Negative Zone where he would immediately attract the attention of it's rule Annihilus. However the Supreme Intelligence would intervene and teach Rick how to use the Destiny Force to keep Annihilus at bay. Much like on Earth-616, Rick would play an important role in helping end the Kree/Skrull war. Resuming his bond to Captain Marvel, who is unimpressed at living a double life after seemingly ridding himself of his transformations into the Hulk. Resuming his life he would meet and start a relationship with Lou-Ann Savannah and signing up with Mordecai Boggs to boost his fledgling singing career. His days as a hero would not be over however as he would clash with the likes of Megaton. This would force Rick to change places with Captain Marvel but one more put him at risk of not only Annihilus but also becoming the Hulk again.

Concerned, Lou-Ann would get in touch with Bruce Banner and Reed Richards in order to try and save Rick from the Negative Zone. When Rick would try to get Captain Marvel to return to the Negative Zone, it would be during a time when Captain Marvel was incapacitated by Compound 13. Having to fend for himself, Rick would suddenly transform into the Hulk once more. The Hulk would become obsessed with fighting Annihilus allowing for Banner to fire his gamma ray device into the Negative Zone. By some twist of fate this would separate Rick from the Hulk. Whil Rick would be pulled into the positive universe by Mr. Fantastic the Hulk would continue his battle against Annihilus. In the final battle, the Hulk would send Annihilus flying into a meteor, the impact compromising his Negato-Gun, causing an explosion that would kill the Negative Zone's ruler.

Free from his bond with Rick Jones, Captain Marvel would seek out his destiny in the stars. Rick, Lou-Ann and Banner would go on to resume normal lives, and the Hulk would find himself at home in the Negative Zone where he would be known as a hero for ridding that realm of the tyrannical Annihilus.

Like this? Let us know!
Retrieved from "https://marvel.fandom.com/wiki/Earth-7812?oldid=5499962"
Community content is available under CC-BY-SA unless otherwise noted.