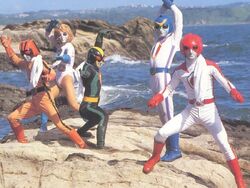 Earth-79203 is a world in which originally was only Battle Fever J, an international team of fighters who fight against monsters and beasts, including Battle Japan, Battle Cossack, Battle France, Battle Kenya and Miss America, use the Battle Fever Robo to battle Satan Egos and his Secret Society of Egos. This world could be considered as a fragment in the timeline of both Super Sentai, Kamen Rider, Metal Heroes and other Toei's heroes' world and has a history that is completely different with Earth-616. Before Battle Fever J is established after JAKQ, one of the first super hero series in the universe was Kamen Rider (with the appearance of two original Riders in that series, both of them are known simply named 1 and 2 respectively), then followed by JAKQ's predecessor, the Gorangers.

Like this? Let us know!
Retrieved from "https://marvel.fandom.com/wiki/Earth-79203?oldid=6418866"
Community content is available under CC-BY-SA unless otherwise noted.