The End of Time
(Home to the Time-Keepers) 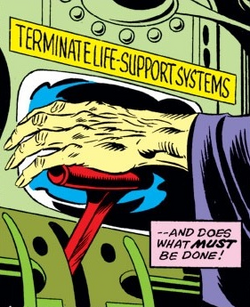 At the end of the multiverse, all surviving realities will come to a single end before the next cycle. The Time Variance Authority's final director, He Who Remains, set in place the creation of living chronal batteries to instruct the next generation of realities and provide chronal energy to retired TVA employees.

Earth-794282 is the final divergence at the multiverse's end created when Thor and his allies attempted to avert Earth-761243 (home to the Time-Twisters). When He Who Remains was convinced by Jane Foster that the Time-Twisters were flawed, he terminated them in their nurture pods.

He went on to create the Time-Keepers as a more perfect version. The Time-Twisters have attempted to ensure that their reality would be the dominant one but were thwarted. At present, this seems to be the true end of time.

The Citadel at the End of Time

Like this? Let us know!
Retrieved from "https://marvel.fandom.com/wiki/Earth-794282?oldid=5873511"
Community content is available under CC-BY-SA unless otherwise noted.