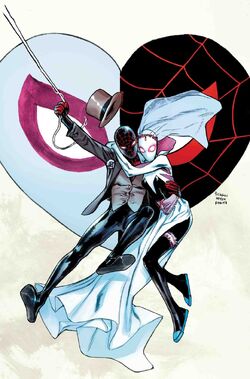 Earth-8 is a possible future of Earth-616 in which Miles Morales married the Gwen Stacy of another world,[1] and both became celebrities.

Twenty years into the future, Miles and Gwen were members of their world's greatest super-team, the Amazing Eight, which was comprised of their two children, Spider-Boy and Spider-Girl, Spider-Ham, SP//dr, Gerry Drew and an unnamed Spider-Woman.

While Miles and Gwen's were on their second honeymoon in Vanaheim, Gwen's younger self from Earth-65 accidentally arrived in Earth-8's New York and sought the Amazing Eight's help. When the younger Gwen asked Spider-Ham for help to fight S.I.L.K. back in her reality, he initially refused, but was convinced by Spider-Girl. Once the villains were defeated, the six members of the Amazing Eight returned to their home universe.[2]

Earth-8 is overseen by Utaa the Watcher, who is harshly critical of his lackadaisical colleague Utau - the Watcher of Earth-65 - since any alterations to Earth-65 would cause irreparable changes to Earth-8 -- potentially resulting in it losing its utopian nature and/or position as Earth-65's default future.[3]

Amazing Eight
Add a photo to this gallery

Spider-Woman (Kravinoff)
Add a photo to this gallery

Like this? Let us know!
Retrieved from "https://marvel.fandom.com/wiki/Earth-8?oldid=6420307"
Community content is available under CC-BY-SA unless otherwise noted.