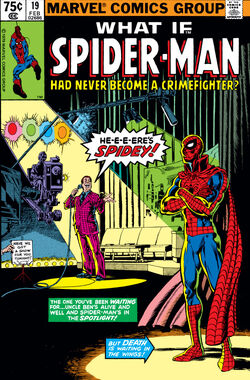 History on Earth-80219 would diverge from Earth-616 at the faithful moment when Peter Parker, who just recently became Spider-Man, had the opportunity to stop the burglar who would shoot his Uncle Ben. In this reality, Parker would see stopping the burglar could enhance his career. In stopping the crook, Parker would prevent the murder of his Uncle Ben and he would continue his career in show business.

Even on this world, Spider-Man's fame would earn the scorn of J. Jonah Jameson. After signing up a to a major motion picture company to star in a movie, Peter Parker would become more and more egocentric in his behavior, even in his civilian identity. As Peter's fame soared, Jameson become more fervent against Spider-Man when his son John Jameson would perish in a space capsule test gone wrong.

When Peter would finally show off his double identity to his Uncle Ben and Aunt May, his Uncle would be less than impressed that his nephew would allow his studies to suffer for fame and fortune. Angry at his adopted parents, Peter would storm out on them, never to return again. He would continue to live his life of fame and fortune becoming one of the most popular entertainers of his time. The more popular Parker would become, the more Jameson would use the Daily Bugle to try and tarnish his reputation.

Growing fed up of Jameson's constant bad press, he would give Jameson a scare by having men show up with guns and pull a fast one by awarding him the "Spider-Man Award for Outstanding Investigative Reporting", further discrediting him in the eyes of the public.

The next phase of Spider-Man's career would be to act as agents for the super-hero community. He would succeed in signing the Fantastic Four, Avengers and X-Men. He would purchase Marvel Comics, ordering owner Stan Lee and artist Jack Kirby to publish two Spider-Man titles monthly.

Following the first successful case of the Daredevil, Spider-Man would convince him to sign on and offer him a new costume. Daredevil would find some of the functionality of his costume ridiculous and scrap them. When Jameson would write an editorial besmirching Daredevil, Spider-Man would decide to teach Jameson a lesson. Going to the Bugle, he would witness secretary Betty Brant being confronted by Big Man and the Enforcers. Following the Enforcers, Spider-Man would be surprised to learn that the Big Man was really reporter Frederick Foswell. Leaking this information to the Daily Globe, it would ruin Jameson's newspaper business. Pressured to stand down as editor of the Bugle, Jameson would instead quit, not willing to back down on his stance on Spider-Man.

After visiting Foswell in prison would inspire Jameson to seek to get revenge against Spider-Man. He would fund money into trying to sabotage his movie sets, and ultimately hire the Sinister Six to try to assassinate him. After a failed attempt to poison Peter by Kraven the Hunter, they would pose as the board of directors and attack Spider-Man and Daredevil directly. Daredevil would jump to his employer's defense and be beaten nearly to death, forcing Spider-Man to fight off the Sinister Six on his own. Easily defeating the Six, he would unmask their leader and be shocked to find it to be Jameson. Realizing how much his actions had effected peoples lives, and someone was nearly beat to death because of his inaction, Spider-Man learned the hard way that with great power comes great responsibility.

Like this? Let us know!
Retrieved from "https://marvel.fandom.com/wiki/Earth-80219?oldid=6549552"
Community content is available under CC-BY-SA unless otherwise noted.