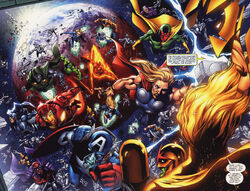 Decades in the future, Nova is leading a great fleet heading toward Earth. Sometimes he relapses due to the damage that the transmode virus inflicted on his mind, fracturing his memories. Forty-three years earlier, Nova (Richard) rebuilt the Nova Corps. Whose members include Phyla-Vell and Gamora. He is told that ever since the fall of Hala, he has been infected with the transmode virus which has no cure and has been fighting it since though one day it would finally kill him.

They have been fighting a decades long war to drive the Phalanx out of known space. It has been Nova's mission for nearly five decades, and it's why he rebuilt the corps. The fleet was heading toward the Phalanx's final stronghold, to annihilate it and end the war. He is told that their final stronghold is the world that he swore he would one day return to and free, planet Earth. Which had been under the control of the Phalanx for over three decades. Upon the fleet's approach to Earth a force of 8 million headed out to space to intercept them, consisting of Phalanx warriors and its Select (the former superheroes and villains of Earth). Nova is incapacitated due to a memory relapse and the shock of seeing a techno-organic Earth. Battle ensues without his participation, and when he awakens he has the Worldmind power him up completely. Nova heads toward the battle, rallying and leading the Nova Corps into battle.[1]

Like this? Let us know!
Retrieved from "https://marvel.fandom.com/wiki/Earth-8041?oldid=5055045"
Community content is available under CC-BY-SA unless otherwise noted.