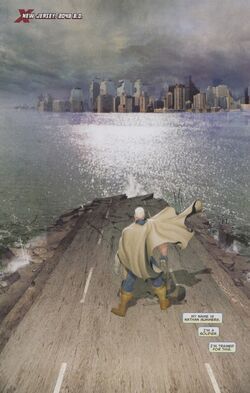 This is the alternate future into which Cable first took the Messiah Baby to protect and raise her.

In 2012, a "superstorm" wiped out several cities across the world and devastated the North America East Coast. In the ruins of New York City, the Turnpike Authority instituted martial law and began ruling cities.

To protect the Messiah Child, Cable began searching for the fabled settlement of New Liberty. Cable studied New Liberty during his childhood among Clan Askani. New Liberty was a lost settlement of peaceful farmers. Similar to Roanoke it simply disappeared from the world. Cable eventually discovered the secret entry to New Liberty.[1]

Cable stayed in New Liberty for over a year. During this time he built a home, buried his artillery in a safe under a cement slab, and met a wife, Hope.[2]

Cable lived happily and unmolested with his wife and adopted daughter until the "President of the United States" and the U.S. Army came in to claim the citizens of New Liberty. To survive in the new hostile environment of Earth and to resist the foreigners settling in North America, individuals calling themselves U.S. Army combined their DNA with DNA of cockroaches. It was these same roach-warriors that invaded New Liberty.[3]

Cable, Hope and Little Girl were barely able to escape New Liberty. They traveled for months, gathering or bartering for food and supplies. They continued to travel until they were brought under gunfire from a local militia. Cable's wife, Hope, died in gunfight. She was buried, and Cable named the Messiah Child "Hope" after her foster mother.[4]

Cable joined with human resistance against the cockroach army. Unfortunately, after two years of fighting, the cockroach armies numbers had swelled and they had developed the ability to fly. Commander Zyker of the human resistance decided to launch their nuclear opposition against Cable's advise. Cable used his time device to timeslide with Hope into the future to avoid the nuclear death that awaited his former comrades.[5]

To limit Cable's progress, Bishop used several WMDs to make most of the world uninhabitable and killed billions in the process:[2][6]

Together Bishop and Stryfe traveled to 2963 where they killed Apocalypse, stole his Celestial Ship and technology and used it to enslave the remainder of humanity and build the Celestial City onto the ruins of the Xavier Institute in Westchester, New York. Shortly after building his empire Stryfe employs Deadpool as security[7] and imprisoned Kiden Nixon.[8]

Stryfe tyrannically ruled over his subjects, the Stryfetroopers, with Bishop as his right-hand-man for nearly a decade until the timesliding pair, Cable and Hope, was joined by X-Force.[9] Together and with help from Apocalypse, Cable and X-Force defeated Stryfe and Bishop.[10]

After the defeat of Stryfe, the Stryfetroopers were free to make a new life for themselves. They plundered the ruins of Stryfe's Celestial City for its technology and built two settlements, the Clean City and Unclean City, a short distance away upon the ruins of New York City. The descendants of the Stryfetroopers became a people with a renewed purpose, a central mission that guided their lives: They were going to fix, or escape this doomed planet. As part of their contingency plan, they built a ship, the Ensabahnur I, equipped with terraforming pods to make a new planet a habitable home. The citizens of the Clean City fought over parts with the citizens of the Unclean City for parts.[11]

Hope and Cable became physically separated during a timeslide which resulted in their chronological separation by two years. While she waited for Cable, Hope hide in the Clean City and befriended a boy named Emil. Hope stayed hidden for two years until Bishop, now posing as the Archbishop of a church, and Cable, impersonating Stryfe, found her. With a power source stolen from the Unclean City's ship, Cable, Hope and several Clean City citizens were able to take off in the Ensabahnur I.[12]

The Ensabahnur I traveled for nearly two years without finding a new habitable planet. During that time, Cable was revealed as an impersonator and imprisoned in the brig. Without much warning the Ensabahnur I was boarded by Bishop and Emil in the Unclean City's ship. Shortly afterward, the Brood boarded the ship. In the end, Hope and Cable escaped in the terraforming pods while Emil stayed on board and sacrificed himself by detonating Bishop's bomb.[13]

Hope and Cable survived the brutal crash-landing back onto Earth. Hope and Cable make encampment in ruins infest with mutant rats.[14] Soon Hope made the decision that she was ready to go home and join the X-Men.[15]

After Cable and Hope made several rapid time jumps, Bishop was still hot on their trail. Finally, Bishop reached them and was almost successful in killing Hope until Cable activated the time device in his arm to sent Bishop to far into the future. In the year 6700 AD, Bishop was left alone to wander a dead world (primarily of his own making) circling a dying sun.[16]

Like this? Let us know!
Retrieved from "https://marvel.fandom.com/wiki/Earth-80521?oldid=6195310"
Community content is available under CC-BY-SA unless otherwise noted.