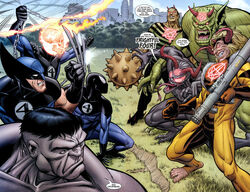 Earth-808122's history appears to be the same as Earth-616's, up until Johnny Blaze either remained Ghost Rider or returned as Ghost Rider earlier. The second known divergence is that when this universe's De'Lila infiltrated the Fantastic Four as her Earth-616 counterpart did, she killed Reed Richards, Susan Richards, and Johnny Storm in the process.

After De’lila was captured, the world mourned the loss of the three heroes, and a powerless Ben Grimm decided to leave the hero business to raise Franklin Richards away from the superheroic life. Before leaving, Ben suggested that the new Fantastic Four (Ghost Rider, Wolverine, Hulk and Spider-Man) remain together to prevent any similar tragedy from happening again.[1]

Like this? Let us know!
Retrieved from "https://marvel.fandom.com/wiki/Earth-808122?oldid=6082454"
Community content is available under CC-BY-SA unless otherwise noted.