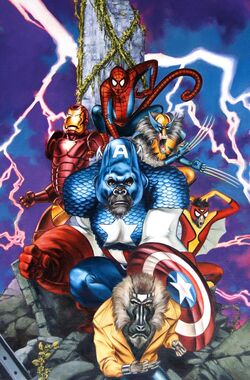 Home to simian versions of Marvel heroes and villains, this world is very similar to Earth-616, but with some key differences. The justice system of this world is that villains are put on trial and if they refuse to reform, they are beaten to death. This reality's Captain America was replaced by Baron Blood and frozen in an iceberg. Baron Blood later sired this reality's Invaders as vampires, except for the Simian Torch, who, due to his android nature, was immune to vampirism. In lieu of being turned, he was killed instead.[1]

Like this? Let us know!
Retrieved from "https://marvel.fandom.com/wiki/Earth-8101?oldid=5866703"
Community content is available under CC-BY-SA unless otherwise noted.