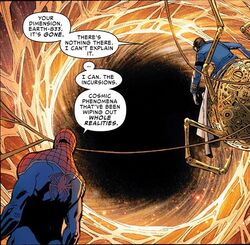 This reality is home to Spider-UK.[1]

When the Master Weaver tried to send Spider-UK back to his home universe after he had been away fighting the Inheritors as a member of the Spider-Army, the Master Weaver noticed that the reality was no more. As a member of the Captain Britain Corps, Spider-UK had been informed of the existence of the multiversal phenomena known as incursions, and concluded that had been the cause of his universe's demise.

Spider-UK is the only known survivor of this reality.[2] He would later die at the hands of Verna, leaving this reality with no survivors.[3]

Like this? Let us know!
Retrieved from "https://marvel.fandom.com/wiki/Earth-833?oldid=5824521"
Community content is available under CC-BY-SA unless otherwise noted.