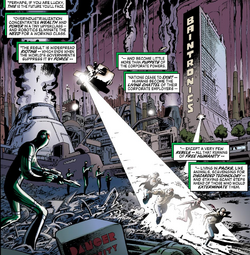 The 1980s witnessed the mysterious disappearance of many heroes, leading to the world being taken over by megacorporations. Virtual reality games were the dominant form of entertainment by the late 1990s. In the black market, there were dangerous versions of these VR games, creating a significant number of addicts called Vidiots. The dominant global corporations were Baintronics, A.I.M, Trasktech and Stark International, all of whom control orbital platforms. Sharing the atmosphere are organizations like S.H.I.E.L.D.[1]

It is a world in which over industrialization resulted in power and wealth being concentrated in a tiny upper class. The working class were replaced by robots which resulted in riots that were suppressed by the governments. Which became the puppets of the corporate powers. Humans are nothing more than slaves to the ruling corporations, as nations no longer exist. The few rebels that exist live like animals, in packs that scavenge technology as they try to avoid extermination.[2]

Like this? Let us know!
Retrieved from "https://marvel.fandom.com/wiki/Earth-8410?oldid=5477413"
Community content is available under CC-BY-SA unless otherwise noted.