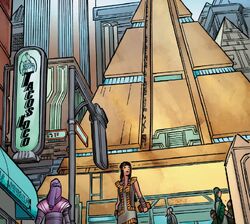 When Moses defied the Pharaoh, in this Earth the Pharaoh's sorcerer defeated him, and Moses was killed. The Sorcerer grew in importance, and eventually received the Ka Stone from a young woman who found it in the desert. Having acquired eternal life and great power, the sorcerer became the Sphinx. He married and eternalized the young woman. Together, they advised hundreds of pharaohs, guided the discovery of new continents, watched the Declaration of Independence and the creation of the United States of Assyria, the civil war that ended the Caucasian slavery; overall, they helped guide civilization.[1]

Then, in the early 20th century, World War I made Europe a bloody battlefield, and the USA had to interfere. The Sphinx and wife moved to the USA, but the period between wars was equally unstable. Another Great War came, this time between the Anglo-Saxons, Egyptians and Assyrians allied against the Asian-Pacific Union. The Asians dropped A-bombs over New Memphis, and destroyed Aknatonikutt and New Hebridas; Maqaman Island survived because of its force field. Exhausted, the Sphinx gave his wife's cat immortality, and gave her the Ka Stone, allowing himself to die at last.[1]

Cannonball, Firestar and Marvel Man, this reality's Vance Astrovik, part of a group of mutant rebels, were intercepted by this Earth's Avengers while they tried to bring secret information regarding the force field around Maqaman Island, the Sphinx's lair. In the ensuing fight, Commander Logan distracted the Avengers long enough for the three to be saved, but was killed by Horus in the process. The three returned safely to their HQ in New Hebridas. Returning to his family home, the Avenger Nova found Sayge, who revealed him the Earth's true history.[2]

A group of the Mutant Liberation Front - including Juggernaut, Cannonball, Marvel Man, Firestar, Beast and Sebastian Shaw - invaded Maqaman Island, having deactivated its force field using information provided by Sgt. Fury and Reed Richards. Meanwhile, fully informed of his Earth's inherent falsehood, Richard Rider left his home to help the Avengers battle the invading mutants. More and more his mind began to turn to the truth (Earth-616), and he switched sides. He knocked out the Avengers, and as the whole MLF invaded the island, a towering Sphinx appeared, ready to destroy the MLF and Earth altogether. Meanwhile, the Richard and the Taylors, humans trying to betray the Sphinx, were killed at the Taylor home. Only young Dwayne survived, ready for revenge.[3]

As the battle between the Sphinx and the MLF raged on, Dwayne Taylor infiltrated the Sphinx home at the Chrysler Building where, now as Night Thrasher, Dwayne saw his world plunging into chaos. Dwayne saw the Sphinx's cat, the last memory of his love of her, and decided to slay it. The Sphinx was distracted when she sensed it, and fled the scene. The MLF started to battle the assembled Avengers, and the members of Earth-616 New Warriors, aided by Sayge (sans Namorita, who was helping an invasion of the Persian Gulf with his cousin, and Speedball, who was just a powerless kid in Springdale, Aknatonikutt), went to the Chrysler building, where they helped Night Thrasher. Richard Rider captured the cat, and threatened to kill it if the Sphinx, whom Sayge revealed the Truth to, didn't alter the world back to its real state. Wanting to save her last token of her lost love, the Sphinx reverted her alteration of the Earth, returning all to normal.[4]

In order to defeat the Avengers, the Time-Keepers used the Forever Crystal to summon Avengers from divergent realities that had turned dark and destructive. Manipulated by the Time-Keepers and given the order to kill, the Avengers of Earth-9105 were among these minions. Rick Jones summoned a host of alternate avengers to fight them who were from timelines that had not turned destructive. However, when Captain America shattered the Forever Crystal they all returned to their native timelines.[1]

Like this? Let us know!
Retrieved from "https://marvel.fandom.com/wiki/Earth-9105?oldid=5866715"
Community content is available under CC-BY-SA unless otherwise noted.