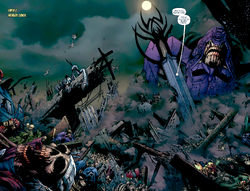 Earth-91126 was largely identical to that of the main Marvel reality, Earth-616, with only a few minor differences and some major differences, aside the unexpected arrival of the Zombies from Earth-2149 to separate locations of this universe. It is uncertain if they also traveled in time or if in this timeline events like The Tablet of Time, Wolverine and Shadowcat in Japan, Iron Man's alcohol problem, World War Hulk, Secret Invasion, occurs in different intervals from Earth-616. However, some events also appeared to have occurred differently as well, for example in this world, Pepper Potts and Happy Hogan were still working for Tony Stark before zombies invaded Stark International, whose patents the Chinese desired to acquire. In addition, the Kree-Skrull War seems to have taken place earlier than in Earth-616 due the Illuminati's presence. Also, Hulk's exile to Sakaar took place while Peter Parker was still attending the Empire State University, so Hulk had no involvement in the Infinity Gauntlet unlike his Earth-616 counterpart.

Eventually this universe is also taken by the zombie virus. Like on Earth-2149, all life is seemingly eradicated, it being unclear if there are any survivors left on the planet other than the New Avengers. The full extent to which the Zombies devoured life on other planets is unknown, though it is implied they are close to exhausting their food supply. It also seems as if this dimension's Galactus also tried to devour this world, as hinted towards outside of the now defunct Avengers Tower.

While the Spider-Man of Earth-2149 attempted to find a cure for the virus and prevent its spread, the presence of his fellow zombies from Earth-2149 would lead to the entire universe being infected much like their own. Giant-Man would amass technology and knowledge to attempt to create another warp portal on the Watcher's citadel so that he could find new worlds to feed. However, he would find opposition from Earth-Z's own zombies as well as Spider-Man's New Avengers. In the final battle all the zombies would be destroyed by Sandman of Earth-Z who had been turned into a living nanite virus that kills all the zombies except for the Sentry. The Watcher of Earth-Z would then transport the Sentry to Earth-2149's past, as he was the initial zombie that infected that world, in the hopes of creating a chronal loop to prevent the zombies of these two realities from spreading the virus further.[1]

Like this? Let us know!
Retrieved from "https://marvel.fandom.com/wiki/Earth-91126?oldid=5866720"
Community content is available under CC-BY-SA unless otherwise noted.