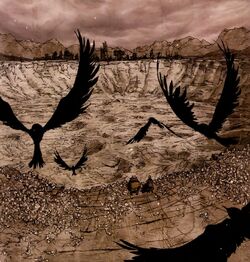 Earth-92272 is a world where Subject X successfully annexed Earth-616, killing almost everyone in it, with the exception of: Wolverine, who had his legs bent out of shape and couldn't walk; Beast, who had been lobotomized to the point that he had the mind of a five-year-old; and Armor, who was forced to push the remnants of her team forward in the hopes of escaping the planet.

Following the way to the extraction point, Armor hoped that this would be a trap and the end of her nightmare, and history give her right: The three mutants end up looking at a massive common grave. Hisako then killed Beast, knocked out and burned Wolverine to death and left, intending to starve to death.[citation needed]

This reality seems to the future of Earth-81211, in regard of many aspects:

Like this? Let us know!
Retrieved from "https://marvel.fandom.com/wiki/Earth-92272?oldid=6481549"
Community content is available under CC-BY-SA unless otherwise noted.