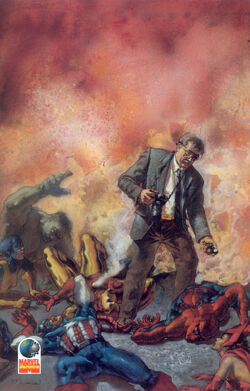 Everything that can go wrong will go wrong.

Earth-9591 was a world similar to, but vastly different from the Earth-616 universe. This world was the product of writer Warren Ellis, envisioned by him as a parody.

Here, Ben Grimm didn't accompany Reed Richards on his test flight (although Victor von Doom did), and the entire crew perished. In this world, most mutants had horrible side-effects to their powers, and the would-be members of the X-Men are held in a Texan prison by President X "for their own good", where they are disfigured to control their powers. Peter Parker's spider-bite caused him to develop a highly deadly and infectious rash that mutated his entire body into a grotesque form. Instead of becoming the Hulk in the G-bomb explosion, Bruce Banner became a green mass of pulsating tumours. The Avengers led a rebellion for California's secession, only to die in the process. Mar-Vell's cancer was the result of nuclear warheads launched at his Kree fleet, the survivors of which were imprisoned in a concentration camp at an abandoned nuclear facility where they developed cancer. The Silver Surfer's corpse was found in deep space; it was believed that he went insane and tore open his chest in an attempt to know what it felt like to breathe air again, only to die of shock and bleed the power cosmic. The accident that blinded Matthew Murdock killed him instead. Galactus mysteriously perished near Mars and was believed to be a dead god. Nick Fury is a cannibalistic secret agent with psychotic tendencies. Johnny Blaze was a motorcycle daredevil in a travelling freak show in a desert who doused his head in gasoline and set it alight; Blaze continued to scream as he rode off into the desert, eventually dying in the attempt. Phil Sheldon sought out to find out what event caused the world to go terribly wrong. When beginning to write the book "Marvels" he succumbed to the same virus which overwhelmed Peter Parker, killing him.[1]

Like this? Let us know!
Retrieved from "https://marvel.fandom.com/wiki/Earth-9591?oldid=5350651"
Community content is available under CC-BY-SA unless otherwise noted.