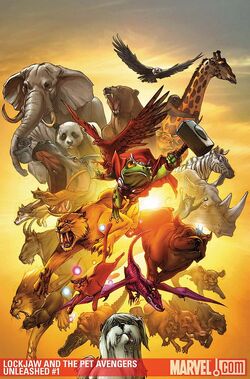 While protecting some dinosaur eggs, Devil Dinosaur was confronted by the time-displaced Pet Avengers. They came to collect the Space Gem, which, unbeknownst to Devil, landed in the nest. The team was able to distract Devil long enough to retrieve the Infinity Gem and return to their native time.[1] Soon afterwards, Devil would briefly see Lockjaw battle Thanos over the Infinity Gems across while the two were teleporting across time.[2]

About 4500 years before The Heroic Age, a group of Makluans crashed landed on Earth. They were initially treated as gods before humans started hunting them for sport. Fin Fang Foom was the last remaining of his species. He was given a particular herb indigenous to that region and subsequently slept for decades.[3]

While Mister Fantastic was looking for the Infinity Gems so that they do not fall into the wrong hands, the Mind Gem fell into the mouth of Lockjaw. He decided to form his own team of heroes to find the lost gems. Joining him were: Throg, Lockheed, Redwing, Hairball, and Ms. Lion. Looking for a second gem lead them to the Savage Land, and a T-Rex.[4] Zabu arrived and helped them chase off the dinosaur and was invited to join the team. They sensed the location of the next gem in the past so they transport into the prehistoric past and ran into Devil Dinosaur, who happened to be protecting its nest, which inconveniently is the location of the gem. They managed to distract Devil Dinosaur while Lockjaw and Ms. Lion got the gem. They then transported themselves back to the present, only to appear over the open ocean.[1] They crashed into the ocean, but were saved by Namor's Honor Guard turtles, who agreed to help them find two more of the gems. Unfortunately, being near the den of Giganto, the turtles flee. Hairball finally freaked out about so much water, waking up Giganto, who swallows them. Meanwhile, Ms. Lion found the gems, and they teleported away to the location of the final gem, the White House. The final gem was located in the Bo's collar. Bo took off barking out the front door, and the Pet Avengers followed, only to run headlong into Thanos.[5] He was the previous owner of the Gems when united as the Infinity Gauntlet, intervenes and killed Ms. Lion. The other animals were angered by this act and used the Gems to strand Thanos in an alternate dimension and subsequently revive their comrade. Retrieving the final Gem, the group decided to separate, but not before Throg advised that they now share a psychic link and will reunite if needed. Ms. Lion resurrected by Hairball via the Soul Gem dubs the group the Pet Avengers. Lockjaw presented the Gems to a surprised Reed Richards.[2]

The Pet Avengers stoped the robbery of a candy store, had some character moments in the park, then telepathically recognized the distress of The Avengers, teleported themselves to Thor, Captain America, and Iron Man only to find they have been turned to frogs. The villain is none other than Fin Fang Foom followed by a legion of Dragons who then proceed to swallow whole everyone but Lockheed.[3] The teams were able to escape the dragons only to find all the dragons gone. Suddenly, they received an emergency message from Commander Steve Rogers about the dragons attacking Xi'an.[6] Arriving in China, Lockheed convinced his friends to help Foom, revealing that the dragons were looking from Makluan eggs. While the rest of the team kept the Avengers at bay, Throg used his abilities to give the dragons access to the dragon egg cavern. After the dragons escaped, he attempted to explain himself and apologize, but Thor congratulated them on job well done.[7]

Pets of Evil Masters
Add a photo to this gallery

Vulture von Doom
Add a photo to this gallery

Like this? Let us know!
Retrieved from "https://marvel.fandom.com/wiki/Earth-97161?oldid=6477375"
Community content is available under CC-BY-SA unless otherwise noted.