Nazis took over the world 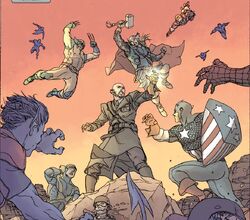 A universe where Nazi Germany won its version of the Second World War. Less than a generation after the war in Europe, Hitler was the head of a fascist state covering the entire world.[1]

In this world, Reed Richards gained superpowers as part of the Nazi space program. He would later use these powers to become head of the Nazi Party. With this control, he was able to assemble the Infinity Gauntlet. While fighting against the revolt started by the world's superheroes against him, in his attempt to remake the world, he accidentally destroyed the Earth, the solar system, and the Milky Way galaxy; with the Gauntlet.[1]

Later, Doctor Doom took the deceased Richards' Infinity Gauntlet and entered this universe, only to find a void where everything once was. However, the Infinity Gauntlet still worked in this universe and so Doom used it to create a new reality in it, governed by both science and magic. He was later betrayed by his own creations and left this universe, noting that his time as an omnipotent God was "beneath him".[2]

Like this? Let us know!
Retrieved from "https://marvel.fandom.com/wiki/Earth-98570?oldid=5745670"
Community content is available under CC-BY-SA unless otherwise noted.