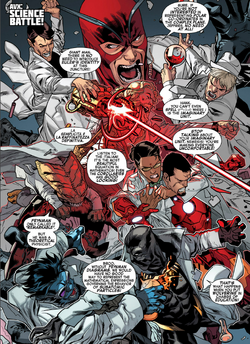 In this reality, the Avengers vs. X-Men conflict was seemingly a brawl between the scientists of the Avengers, those of the Jean Grey School, the X-Club and Leonardo da Vinci, seemingly launched because of a scientific dilemma and the necessity of using or not Euler's identity to solve it, but also about the quality of that equation, and the works of the well-known physicist Richard Feynman.

There was seemingly no clear side taken in the fight.

Like this? Let us know!
Retrieved from "https://marvel.fandom.com/wiki/Earth-TRN338?oldid=4181116"
Community content is available under CC-BY-SA unless otherwise noted.