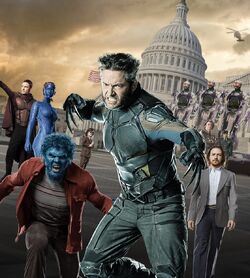 This reality shared the same history as Earth-10005 up until 1973, at which point the Wolverine from that universe travelled back in time from 2023 in order to prevent Mystique from killing Bolivar Trask and thus avert a dystopian future.[1]

Driven by the belief that mutants will one day eradicate the human species, Bolivar Trask commissioned the Sentinel program, a robotic police force designed to hunt down and kill mutants. Mutant shapeshifter Mystique moved to assassinate Trask before the program further developed, but mutants of a dystopian future had pinpointed this as the event that triggered mutant annihilation, and so they sought to prevent it by sending one of their own back in time. By doing so, the X-Men were reformed, the dystopian future was averted, and mutants were set on a new path of redemption.[1]

Following the revelation of mutants' existence to the public, many began fearing what they could do while others formed cults and organizations in response to these mutants. One cult was able to discover what they believed to be the first ever mutant in history, En Sabah Nur. Their discovery led them to excavate his remains from under a fallen pyramid, unknowingly awakening En Sabah Nur from his dormancy. Outraged at what had become of the world during his slumber, En Sabah Nur gathered together four powerful mutants to help him cleanse the world. However, in the end, he was defeated by the X-Men and a mutant who wielded the power of the Phoenix force.[2]

While on a rescue mission in space, the X-Men encountered the true cosmic Phoenix force, which bonded with Jean, the young mutant who wielded a manifestation of its power a decade prior. The Phoenix fought internally within Jean, which broke the mental barriers that Professor Xavier put within her to suppress memories of her childhood trauma. Under the corruption of the Phoenix, Jean accidentally killed Mystique, which caused the X-Men to fragment and Erik to turn her away. The X-Men and Erik only combined forces to help Jean when an alien race known as the D'Bari arrive on Earth, with the intention of conquering it with the Phoenix force. In the end, the alliance was enough and Jean sacrifices herself to end the D'Bari plot. Xavier retired from the school, which was renamed to the Jean Grey School for Gifted Youngsters.[3]

In the modern age, Francis Freeman started developing experiments on how to trigger the dormant mutant gene within any ordinary human via torture and near death experiences. Freeman was successful in creating mutants for his criminal organization, but eventually came into conflict with mutant mercenary Deadpool. Deadpool, determined to get back his ex-girlfriend from Freeman, and teamed up with a couple of X-Men, took down Freeman's organization and put a stop to the mutant experimentation.[4]

By this time, the Essex Corporation had also begun experimenting on the mutant gene, through its appearance in adolescents. They had multiple laboratories and facilities around North America. One facility in particular was the Milbury Hospital, a secure mental institution run by Dr. Cecilia Reyes to evaluate potentially dangerous young mutants who could be killers for Essex. Five young mutants, all of whom believed they were being trained for the X-Men, were detained at the facility but grew increasingly hostile and skeptical due to the nature of the facility. Eventually, they rallied together to escape when one of them unintentionally summoned a Demon Bear, which killed Dr. Reyes. After the Demon Bear was defeated, the group learned Reyes' force field was gone, which allowed them to leave and head to the nearest town.[5]

Like this? Let us know!
Retrieved from "https://marvel.fandom.com/wiki/Earth-TRN414?oldid=6465679"
Community content is available under CC-BY-SA unless otherwise noted.