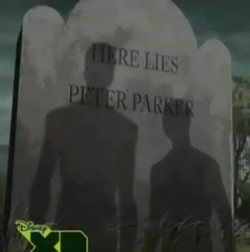 A version of the Ultimate Universe that was visited by the Spider-Man of Earth-12041. Similar to Earth-1610, this worlds Spider-Man had died after his final battle with the the Goblin, after which Miles Morales who had also gained spider abilities took it upon himself to succeed as next Spider-Man.

When Miles was stuck on Earth-12041, Gwen Stacy emerged as the new spider-themed hero.

Like this? Let us know!
Retrieved from "https://marvel.fandom.com/wiki/Earth-TRN457?oldid=5727575"
Community content is available under CC-BY-SA unless otherwise noted.