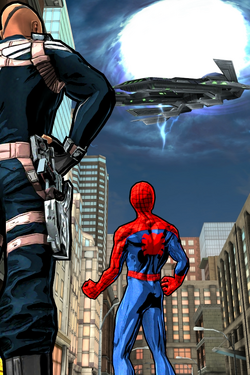 New York is gonna get some nasty new residents...

Earth-TRN461 was the most recent reality to be invaded by the Sinister Six. S.H.I.E.L.D. created a portal to bring alternate versions of Spider-Man to help him defeat his alternate nemesis-es.

During the Inheritors' invasion, portals to and from Earth-TRN389 started popping up randomly.

According to Madame Web, the reality had become extremely unstable as it started bleeding into the Spider-Island reality, but S.H.I.E.L.D. was able to send a magnetic force to separate the realities.[1]

Cult of the Spider

S.H.I.E.L.D.
Add a photo to this gallery

Spider-Men
Add a photo to this gallery

Vulture (Adrian Toomes)
Add a photo to this gallery

Like this? Let us know!
Retrieved from "https://marvel.fandom.com/wiki/Earth-TRN461?oldid=6943225"
Community content is available under CC-BY-SA unless otherwise noted.