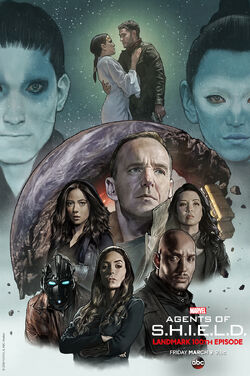 This reality shared the same history as Earth-199999 up until the invasion of Thanos's forces. Shortly after the attack on New York City by Ebony Maw and Cull Obsidian but before the battle of Wakanda, the Earth was destroyed by Glenn Talbot who was infused with the power of gravitonium. Only a few thousands of Humans survived the cataclysm in the Lighthouse, which several years later was taken over by the Kree, who enslaved Humanity but continued to breed them in hopes of producing Inhumans, whom they sold as weapons.

This reality appears in Marvel's Agents of S.H.I.E.L.D. Season 5 episodes One to Ten. At the end of the season, the main characters change the timeline, making sure that their future will remain to be set in Earth-199999.

Like this? Let us know!
Retrieved from "https://marvel.fandom.com/wiki/Earth-TRN676?oldid=5684857"
Community content is available under CC-BY-SA unless otherwise noted.