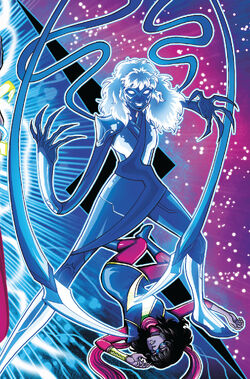 In this reality, the ancient Kree Empire expanded using scouts equipped with Kree Stormranger Nanosuits. One Stormrider, codenamed 20-14, came across the planet Saffa, where the indigenous people were besieged by an army of genetically-engineered beasts. Deciding to fight on their behalf, Stormranger 20-14 vanquished the Beast Legions and came to be revered as a hero called the Destined One by the people of Saffa.[1]

Centuries later, the Beast Legions returned and the Saffan sages Left and Right summoned Ms. Marvel from Earth-616, accidentally bringing her parents with her.[2]

Boarding Stormranger 20-14's ship, Ms. Marvel bonded to her nanosuit and used it to destroy the Unseen Masters' starship, which had been controlling the Beast Legions. The Saffan sages then sacrificed themselves to return Ms. Marvel and her family to Earth-616, erasing her parents' knowledge of her secret identity at the behest of Prince Cheb Hura as an unwanted favor.[1]

Like this? Let us know!
Retrieved from "https://marvel.fandom.com/wiki/Earth-TRN786?oldid=5603328"
Community content is available under CC-BY-SA unless otherwise noted.