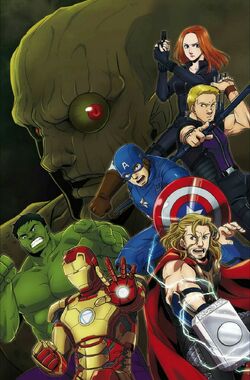 This reality shared a similar history to Earth-199999 until after the Chitauri invasion of New York City. During Tony Stark's party a Zombie attacks but was taken out by Black Widow. However, it was discovered that the infection is spread by touch and both Thor and Black Widow have become infected. They attempted to contain Thor and Black Widow whilst Bruce Banner and Tony looked for a cure. Thor escaped and went after the other Avengers.[1]

Tony and Hawkeye held off Thor, while Bruce continued researching, until Thor was taken out by a Chitauri weapon wielded by Toshiko Amano. She revealed she was the source of the plague, which was a mutated Chitauri virus and she had the only known anti-virus. They administered the cure to Thor but found it didn't last very long, before Thor reverted.[2]

Meanwhile, the plague was spreading through New York and War Machine was helping to contain the infected. One approached his barricade and exploded. The Avengers rushed to investigate and Iron Man found only an empty War Machine armor. He, Cap and Hawkeye were surrounded by the infected and several exploded, knocking them unconscious. Back in the lab, Bruce and Toshiko developed the second iteration of the anti-virus. In order to test it, Toshiko infected herself and began to turn. However, this version also failed. Whilst turning she screamed out the name, Jasper. Looking in Toshiko's files, Bruce discovered a video that showed that the virus had been mutated by someone else.[3]

Bruce used this new information to develop a new anti-virus was able to administer it to Thor, Black Widow and Toshiko before he was himself infected and turned into a zombie Hulk. Iron Man, Cap and Hawkeye awoke to find themselves uninfected having been saved by a Dr. Jasper Scott, who had administered a "cure" to each of them.[4]

The three of them tried to stop Hulk, but we unable to until a newly cured Thor and Black Widow administered the cure to Hulk, reverting him back to normal. Toshiko arrived and it was discovered the Dr. Jasper Scott had infected Iron Man, Cap and Hawkeye with a new strain of the virus that was not responding to the current anti-virus and she revealed he was her brother and the actual source of the virus. Whilst they had been working on an early stage of it, they discovered it could regenerate missing fingers and Jasper was patient zero. Jasper, meanwhile was unleashing his new zombies onto New York.[5]

The Avengers went out to Jasper and were overwhelmed by the zombies long enough for Jasper to kidnap Bruce and attempted to use him to convince Tony to return to weapon's manufacturing. Bruce refused and was eventually rescued just before it was revealed that Jasper was mutating into a Human-Chitauri hybrid.[6]

They were able to defeat him and Bruce adminstered a cure he had obtained from Jasper on the remaining Zombies and when Thor left he took all samples of the virus and any data on it to Asgard.[7]

Like this? Let us know!
Retrieved from "https://marvel.fandom.com/wiki/Earth-TRN808?oldid=5803184"
Community content is available under CC-BY-SA unless otherwise noted.