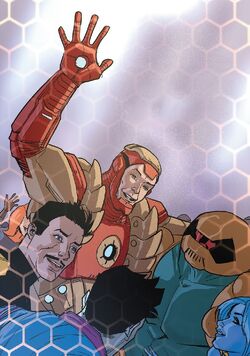 In this reality, the Extinction Entity that haunted Arno Stark was real. It arrived on Earth by the time Iron Man and his allies had followed Arno Stark to the Stark Space Station to stop his plan to mentally control all of humanity to fight the monster. Convinced by the existence of this threat after being skeptical of Arno's claims that it was coming, Tony offered his help. Tony shared his Virtual Armor with Arno, repairing his suit.

Arno then rallied Tony and his allies to engage the Extinction Entity. They were joined by Earth's heroes, and even giant-sized powerhouses like the mentally-controlled Controller, the Jim Rhodes-piloted Ultimo, and Andy Bhang using the Fin Fang Foombuster Armor.

The Extinction Entity was eventually defeated when Arno willingly assimilated himself with it, causing it to explode as a result of Arno's paradoxical nature of being a human who was more of an artificial intelligence at heart. Tony then caught Arno when he was falling back to Earth, and forgave him for seizing control of his life.

This scenario manifested on Earth-616 in the form of a virtual dream within the eScape that Arno Stark was submerged into by Tony Stark when he encased Arno in his Virtual Armor in order to stop his plan to take control of humankind to combat the non-existent Extinction Entity which was a delusion caused by his relapsing illness.[1]

Like this? Let us know!
Retrieved from "https://marvel.fandom.com/wiki/Earth-TRN813?oldid=5679323"
Community content is available under CC-BY-SA unless otherwise noted.