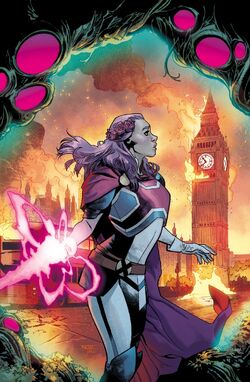 Experimenting with attempts to recreate the Captain Britain Corps, Jamie Braddock created a pocket reality in which England was at war with Krakoa and the loyalties of his sister Betsy were caught in the middle. Jamie intended for this new Betsy to be the first of a new Captain Britain Corps, but when she violently refused he implemented another solution instead. An incomming volley had this Betsy killed and the pocket reality fractured again so that all of her four companions were each offered the Amulet of Right and transformed into a new Captain Britain.[1]

These new Captains were later captured on Otherworld by Saturnyne who considered them heretical and planned to have them destroyed. However, they managed to escape and went rogue against their creator Jamie Braddock, attempting to kill him. They were no match for his reality-bending powers and he easily killed Jubilee as an example to others.[2]

Like this? Let us know!
Retrieved from "https://marvel.fandom.com/wiki/Earth-TRN839?oldid=5819150"
Community content is available under CC-BY-SA unless otherwise noted.