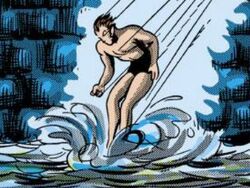 At a deserted pier on the East River, the X-Men were trying to decide what to do with the Toad when he suddenly fell into a trance, pulling out a communicator and summoning a capsule for the sky. The X-Men then decided to go with the Toad to wherever he was heading in order to find the Angel.[1]

The fleet craft of Magneto was sighted zooming low over the East River, gliding towards the United Nations Headquarters.[2]

A few days later, Hawkeye, Goliath and the Wasp were seen floating through the air across the East River, bound to the Collector's airship.[3]

Sometime later, as the Avengers were hired by Cornelius van Lunt to fix an unsafe tunnel beneath the East River, Kronus set a trap for them. The Split-Second Squad set off a bomb to kill the team, but the Avengers anticipated the trap and exited that sunken tunnel before it was destroyed.[4]

Sometime later, Spider-Man (Peter Parker) was rescued from drowning by Yellowjacket, who noticed him falling from the Queensboro Bridge.[5]

On Pier 32 B, Nguyen Ngoc Coy and his henchmen brought Leong and Nga Coy Manh to a ship that would have taken them away to be tested for paranormal abilities. The children were eventually rescued by Spider-Man, the Fantastic Four and their sister Xi'an, who absorbed his brother Tran Coy Manh's life-force and became Karma.[6]

A while later, Daredevil rescued the Black Widow from drowning into the East River.[7]

Matt Murdock was later thrown into the East River inside a locked taxi by Kingpin's men, but he eventually managed to escape.[8]

Sometime later, Tombstone battled Spider-Man in the East River, and emerged holding his mask, claiming to have killed him.[9] The Black Cat rushed to save Spidey, and they both proceeded to track down the villain.[10]

A short time later, the Zombie climbs out of the East River and began shambling across the docks.[11]

A while later, Spider-Man and X-Man stopped Electro from blowing up an unimposing building owned by Con Edison along the border of the East River, which supplies electrical power to the city of New York.[12]

Sometime later, Hawkeye was attacked by Mutaurus along the waterfront of New York's East River.[13]

On the banks of the East River, a suffocating Spider-Man was reluctantly saved by Clarence Fielding.[14]

After battling Dr. Octopus and the Spider-Woman in their underwater base, Spider-Man resurfaced in the East River.[15]

Eddie Brock used to live in a single room occupancy hotel near the East River.[16]

A short time later, the Fantastic Four battled a wooden giant which appeared in the East River.[17]

Over the East River in Lower Manhattan, the Avengers rescued the Juggernaut from the Exemplars.[18]

At a biker bar near the East River in Brooklyn, Spider-Man and the Black Cat rescued Norah Winters from a band of Goblin followers.[19]

Daredevil later crossed the East River through the Brooklyn Bridge.[20]

During Infinity, the Red Hulk fought against Supergiant's soldiers in the East River.[21]

Alchemax built Blackthorne Prison in the East River. When Spider-Man (Miguel O'Hara) broke into the prison, he was attacked by a mind-controlled Man Mountain Marko. He and his halo-agent, Lyla, kept Marko under the river until he passed out.[22]

Titans Island was set in East Rive, and built upon the island was Titans Tower, the base of the Teen Titans.[23]

Tom was found by Officer Bill drinking on the East River and was about to be reprimanded by the policeman when suddenly appeared before them a giant extradimensional monster.[24]

Like this? Let us know!
Retrieved from "https://marvel.fandom.com/wiki/East_River?oldid=5796798"
Community content is available under CC-BY-SA unless otherwise noted.