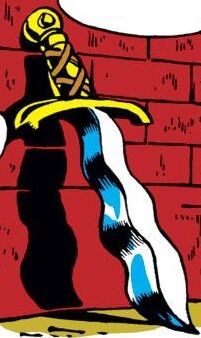 Merlin used the fallen Starstone to create the four magical items: a sword, a shield, a staff, and a chalice, then offered Sir Percy of Scandia to pick any one for his own. Sir Percy chose the sword and became the Black Knight, and Merlin cast a spell to destroy the others. Before Merlin's spell could be completed, Mordred intervened and stole the ebony staff. He used this staff to create the Ebony Dagger, the only weapon that could slay the current wielder of the Ebony Sword.[1]

When King Arthur retreated to Castle Scandia, Sir Percy was informed by Merlin and gave chase. He arrived too late, seeing that Arthur had being slain already, fighting against Mordred's knights.[2] While Percy felt the presence of Mordred who was ready to kill him, Merlin showed him a vision of world were Camelot became corrupted and Percy understood his death was needed. Mordred then slayed him with the Ebony Dagger.[1]

Centuries later, the spirit of Mordred empowered the once knife throwing expert Paul Richarde, with a flying gargoyle and armor, sending him to kill Dane Whitman, the latest Black Knight. During a crucial moment to strike, the dagger fell from Paul Richarde's hand and was lost in the fight.[2]

The weapon is enchanted to slay the owner of the Ebony Blade, and just as indestructible as it blade counterpart.

Like this? Let us know!
Retrieved from "https://marvel.fandom.com/wiki/Ebony_Dagger?oldid=6508228"
Community content is available under CC-BY-SA unless otherwise noted.