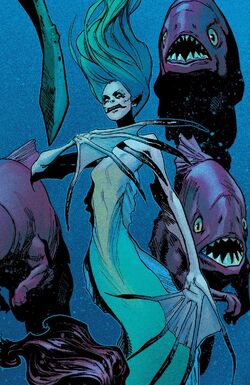 Echidna was the Elderspawn[2] spawn of Ceto and Phorcys, and as such the granddaughter of the Elder God Set.[3]

She mated with Varcolac, she sired Angerboda, and with Typhon to birth Cerberus, the Chimaera, Orthrus, Ladon, the Nemean Lion, the Lernean Hydra,[3] and many other Greek monsters. After Typhon was imprisoned in Mount Etna for rebelling against the Olympians, Echidna retreated to Libya and began kidnapping children to feed to her offspring until she was purportedly assassinated by Argus, a giant in service of Hera.[4] She also sired the Snakes of Many Colors.[5]

After Atlantean King Namor changed his policy on the relationship between the ocean and the surface, he declared his territory off-limits to all but its native inhabitants. Echidna appeared as one of the members of the Defenders of the Deep, Namor's own super-team assembled to impose his will on the surface world's presence in the oceans.[6]

Like this? Let us know!
Retrieved from "https://marvel.fandom.com/wiki/Echidna_(Earth-616)?oldid=6409449"
Community content is available under CC-BY-SA unless otherwise noted.