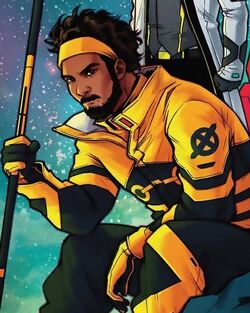 Eden Fesi, alias Manifold was an indigenous Australian living in Kata Tjuta, Australia, under the tutelage of the X-Men ally Gateway. Eden was selected as one of the many unregistered superhumans, hand picked by Nick Fury as part of his Secret Warriors. Initially, Fury attempted to recruit him to another unknown team, but Gateway refused. Hesitant at first, he agreed when Gateway gave his blessing for Quake to enroll him.[5]

After joining the team Eden went on several successful missions with them. On a particular mission where his powers were key in the team's escape he was badly injured. The team barely made it out alive. The team disbanded, as Hellfire had betrayed them and Eden slipped into a coma.[6] Eden eventually made a full recovery.[7]

Eden was recruited into the Avengers after the the conflict between Earth's Mightiest Heroes and the X-Men. Together with the other new recruits, he traveled to Mars to rescue the original team and fight Ex Nihilo.[8]

When the Avengers fell under S.H.I.E.L.D. authority, Manifold was one of the members who left and joined A.I.M., now under the leadership of Bobby Da Costa.[9]

During the final incursion, Manifold was part of the Illuminati's evacuation plan, in their attempt to have humanity survive the end of everything. When the ship carrying the individuals the Illuminati had selected for survival was destroyed, Manifold channeled his powers through a machine that would help the Illuminati find the survivors that they "needed". Manifold succeeded in summoning all those needed, but burned himself out in the process, leading to his death.[10]

A Nation Under Our Feet

Once the universe was destroyed,[10] it ultimately came back.[11] Manifold was restored back to life not remembering his sacrifice. He ended up in Wakanda where he assisted the Black Panther in stopping the revolts within the country by teleporting T'Challa and his Hatut Zeraze to strategic areas were the revolts were taking place.[12]

The Intergalactic Empire of Wakanda

After T'Challa was contacted by the Emperor of the Intergalactic Empire of Wakanda, he and Manifold went to meet him, but were instead captured and their memories were wiped.[13] Manifold was made an enforcer for the empire and lead an army of Askari to fight the rebel group known as the Maroons.[14] However, Manifold managed to free himself from the empire's control and aided T'Challa and the Maroons against the empire.[15] They eventually returned to Wakanda on Earth, but the empire had been following them and waged war with their motherland. Manifold was among the individuals to help Wakanda in their war against the intergalactic empire.[16]

Manifold later appeared as the leader of S.W.O.R.D.'s mutant sub-team The Six. With the help of the Six, Manifold is able to transcend his limitation of only being able to use his powers in his native universe. Managing to cross over to another dimension within the mutliverse, he and the Six were able to claim for S.W.O.R.D. what was they were searching for: the Mysterium Tremendum.[17]

Eden is a Mutant born with the following abilities:[3]

Ourano Communication: Manifold's true power is in fact not merely spatial warping for intergalactic transportation, but was in fact the ability to communicate with the universal fabric itself in order to acclimate such an effect. Among other amazing feats.[18] I.e. coaxing it to make itself solid enough to stride on open air as if it were a walk way, bend light around the area he occupies in order to accommodate invisibility, open pinholes from one location to another in order to actuate spying on another location without fear of detection. Even emitting a portal to produce low level emission of light to act as a reading instrument.[18]

Expert Survivalist: He is able to survive in the harshest of environments without a problem and is able to find sustenance in those same hostile places. It also makes him a skilled hunter.

Medical Knowledge: During the Infinity event, Eden has shown that he possesses remarkable skill as a healer. He was able to nurse soldiers when no one else could, what makes it more incredible is the fact that most of the soldiers he nursed were aliens. Eden also possesses a great deal of knowledge about useful plants and herbs.

Hand-to-Hand Combatant (Advanced): Eden is a naturally good fighter in his own right. He was trained in the fighting forms of his people and can hold his own against multiple combatants. He is also adept at combining his fighting prowess with his teleportation powers.

Spearmanship: Eden's weapon of choice is a long spear which he uses with great skill. He is able to use it so well that it could be considered an extension of his body. It is not only his weapon of choice but also his hunting tool.

Eden possesses the normal strength of a human who engages in intensive and extensive physical exercise. As a result, he can press lift up to twice his body-weight with some effort. It should be noted that Eden has a healthy lifestyle.

Manifold can not use his powers outside of his native Universe.[19]

Eden needs to know his point of origin before activating his powers. If he gets lost or turned around inside a windowless structure, he needs to find a reference point, such as the sky and horizon, to re-calibrate his internal senses before teleporting.[20]

Like this? Let us know!
Retrieved from "https://marvel.fandom.com/wiki/Eden_Fesi_(Earth-616)?oldid=6425728"
Community content is available under CC-BY-SA unless otherwise noted.