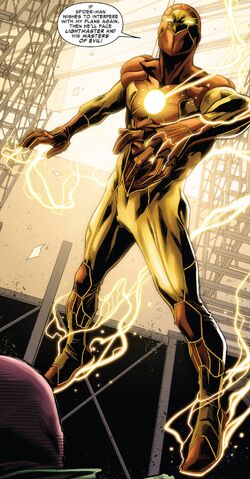 I AM -- LIGHTMASTER! And the time has come to take matter into my own hands!

Dr. Edward Lansky was the vice chancellor of the Empire State University, New York City.[1] The city's mayor was preparing some budget cuts which would have damaged the University. To avoid this, Lansky prepared a criminal attack, hiring Tarantula to stage his own and when that failed to kill Mayor Beame,[1] while at the same time using his knowledge and the University laboratory to create a suit.[2]

Using the name of Lightmaster he recruited criminals Kraven the Hunter and Tarantula to kidnap three important civil servants of the city government. Peter Parker was attending to the ESU when he discovered Lansky's plan and defeated him with an electric current he hoped would short circuit the suit.[3] However, it interacted with the experimental suit and transformed Lansky in a pure light being, completely unstable.[2]

After some weeks, the energy-mass of Lansky began to dissipate in the atmosphere, and he was forced to be always surrounded by light to survive. Lansky, motivated by revenge towards Spider-Man, attracted him to a modified storage house full with neon light, and fought him.[4] During the fight, the Lightmaster overloaded New York's power system and caused a brief blackout. When Manhattan was suddenly dark, the Lightmaster completely dissipated.[5]

He did not die, however, instead going to a "light dimension". He could escape from there by storing enough physical strength to use a powerful light source on the physical world. The mutant Dazzler helped him to reach an existence, though a non-physical existence.[6][7][8]

He escaped again from the dimension using Quasar's energy-bands, which allowed him to mind-control Quasar's body. The Lightmaster then designed and built an equipment to revert the accident which transformed him into a lightbeing. Although Quasar and Spider-Man tried to stop him, the Lightmaster used the device and became a human being again, with no super-human powers. After these events Lansky is sent to prison for his crimes.[9]

Lansky was released from prison (or escaped) and reclaimed his identity as Lightmaster, at one point battling the She-Hulk and Death's Head.[10]

Lansky was released into the custody of Genetech, who experimented on him to increase his power. The experiment worked but he was very unstable. He was defeated by Cloak and Dagger and taken back into custody by the Light Brigade.[11][12][13]

Bar With No Name

Lansky was a regular visitor to the Bar with No Name. The lawyer Mallory Book confronted them because nobody wanted to hire her since she had an affair with Awesome Andy. Two-Gun Kid attacked everyone when Batroc insulted her.[14] He battled Spider-Man when he visited the bar.[15]

He was had been hired by the "One World Church" to distribute the Façade Virus, which was intended to use to turn everyone blue and thus eliminate racial divides.[16] Cable subverted his control and instead turned everyone pink for two days, before publicly disabling the virus.[17]

He battled Spider-Man and Black Cat [18]

During the Secret Invasion, Lansky joined the Hood's Gang and attacked a Skrulls.[19] Lansky along with the gang attack Mister Negative; the dispute was that the man was in charge of all of Chinatown's criminal operations and resisted handing them over to the Hood.[20]

Lightmaster was among inmates housed at an unnamed prison. He participated in a prison riot until but were defeated by Mimic and Rogue of the X-Men.[21]

Lightmaster teamed-up with the Wrecking Crew and formed a new Masters of Evil to fight against Spider-Man (Otto Otavius in Spider-Man's body) and his Superior Six.[22]

Like this? Let us know!
Retrieved from "https://marvel.fandom.com/wiki/Edward_Lansky_(Earth-616)?oldid=6075946"
Community content is available under CC-BY-SA unless otherwise noted.