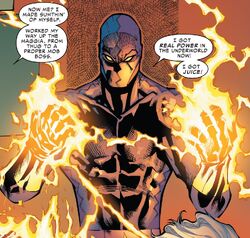 Ha! Hardy, you kill me. C'mon, everyone in this town knows you're a joke. The Spider played you good and now you got nuthin'. Not a penny to your name... and a name that ain't worth a damn. Now me? I made sumthin' of my self. Worked my way up the Maggia, from thug to a proper mob boss. I got real name in the underground now! I got juice! And what do you got?!

Lavell took over the super-powered costume and identity of the Eel from the original Eel, Leopold Stryke, who had died by then. As the new Eel, Lavell first ran afoul of Power Man and Iron Fist when he and Man-Mountain Marko unsuccessfully attempted to free the Maggia boss known as Hammerhead from police captivity while being transported to a new prison.[1] Later, he was hired by the criminal Nightshade and assisted her in her attempt to rob the people attending a New York City society event. This time the Eel was defeated by Iron Fist and the former criminals Stiletto and Discus, whom Nightshade had tried to force to help her.[2]

At one point, Eel was hired to become a member of the New Enforcers.[3]

Lavell later joined the Crimson Cowl in her weather-domination scheme as a member of the Masters of Evil.[4]

During the events of the Secret War, Edward was among the supervillains hired by Lucia von Bardas to attack Nick Fury and his heroes.[5]

He joined the fifth Serpent Squad led by the Red Skull's daughter Sin. They attacked the Senate offices under the orders of the Red Skull, but the new Captain America defeated them all except for Sin.[6]

Along with the rest of the Serpent Squad (minus Sin) Eel worked for the new Hydra.[7]

Following the events of Otto Octavius' time as Spider-Man, the Kingpin's Hand faction, Shadowland's fall, Peter Parker's return, and the rise and fall of the Goblin Nation, the Eel became the leader of one of the Maggia faction and a major crime power. He was called to reunite with two of the other crime powers, Mister Negative's demon empire and the Goblin Nation remnants lead by the Goblin Knight, to divide the criminal underground between them. While going there, he was interrupted by the Black Cat and Electro. She warned him she would be crossing his path. He laughed at her threats and taunted her over her defeat at the hands of Octavius. He attacked her while asking her what she had. But she told him that as a thief, she took what she wanted. Electro attacked him and his men while Black Cat taunted him that she would take everything from him. She interrupted the meeting by crashing Eel through a window and demanding the Eel's part. However, Negative refused, saying that she only had a reputation until the Spider took it away. She replied that all of them were outed by Spider-Man but that she would be the one that defeats him.[8]

The Eel was seen attending the meeting of criminals recruited by the Hood to get revenge on S.H.I.E.L.D. after the events of Pleasant Hill.[9]

The Eel is highly skilled in the field of electronics[10]

The Eel possesses the normal human strength of a man of his age, height, and build who engages in moderate regular exercise[10]

Like this? Let us know!
Retrieved from "https://marvel.fandom.com/wiki/Edward_Lavell_(Earth-616)?oldid=6223930"
Community content is available under CC-BY-SA unless otherwise noted.