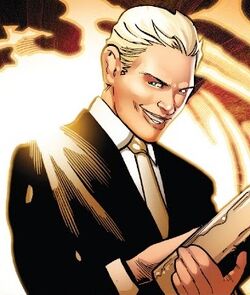 Ned Leeds was a field reporter for the Daily Bugle, where he met Betty Brant. Ned comforted her after her brother Bennett had been killed by Blackie Gaxton.

Betty had previously had a relationship with Daily Bugle photographer Peter Parker but his inability to hold dates and the rough time that she was going through brought the relationship to an end.[1] Betty then fell into the arms of Leeds.[2] Even though he was away on an assignment in Europe for awhile (with Betty rekindling some of her emotions for Peter during this time), the two remained in contact and started dating again after his return.[3] Eventually the two became engaged,[4] and during this time, he was being promoted to City Editor of the Daily Bugle.

The Jackal and Marriage

The Jackal created clones of Spider-Man and Gwen Stacy and Ned was held hostage while the two Spider-Men fought each other.[5]

Soon afterwards Ned and Betty got married, with Ned choosing Peter Parker as his best man, however on their wedding day, the marriage ceremony was interrupted by the criminal Mirage who was promptly defeated by Spider-Man.[6]

J. Jonah Jameson assigned Ned the investigation into the new villain known as the Hobgoblin.[7] One night, Ned followed the mysterious Hobgoblin after a confrontation with Spider-Man,[8] only to be caught and brainwashed by "Hobby" into doing criminal acts. The Winkler brainwashing process intermittently convinced Ned he actually was the Hobgoblin, leading him to act in Roderick Kingsley's place on several occasions. Kingsley used Leeds' connections to orchestrate an alliance with Richard Fisk, under the name of The Rose. Fisk, believing Leeds was the Hobgoblin and his friend, came to New York and set up a criminal operation with Hobgoblin as his partner, eventually coming to deft the Kingpin, his father.[9]

The brainwashing sessions made Ned's home life unstable, making him violent and paranoid about his work and his wife.[10]

Ned decided to aid the Baron Mordo in his plan to reshape reality. He entered the Sanctum Sanctorum and stole the magic book known as the Word of God. This book allowed them change their universe, with Mordo becoming the Sorcerer Supreme and Ned, in his Hobgoblin identity, Mordo's apprentice.[11] When Spider-Man, with his black suit, came to the Sanctorum to find some answers, since he still retained his memories, but was attacked by Hobgoblin.[12] When Peter was enjoying some time with his aunt and uncle, Hobgoblin attacked their house, killing aunt May.[13] When Spider-Man, Doctor Strange, and Red Cat returned to reclaim the Word of God, Hobgoblin and Baron Mordo fought back, forcing Spider-Man and Steange to retreat, while Mordo berated Red Cat for helping them.[14] After Red Cat had Spider-Man and Strange go to the Nightmare World Mordo managed to trap them inside the dimension, and then proceeded to erase the Word of God out existence.[15] However, Spider-Man and Strange managed to recreate the Word of God within the Dream Realm and undo the damage done to their reality by Mordo and Hobgoblin, with Ned returning to his former self with no memory of this ordeal.[16]

When the Gang War for Kingpin's territory got too intense, Kingsley decided to retire the Hobgoblin identity and cut his losses. He leaked details of Ned's "true identity" as the Hobgoblin, leading to Leeds being murdered at the hands of the Foreigner's men while on assignment in Germany. This allowed Kingsley to slip away, confident that his enemies believed the Hobgoblin to be dead.[17]

Despite his best efforts to fight off his assailants, Leeds lacked the real Hobgoblin's enhanced strength.[7] After his right shoulder had been grazed, his left arm was broken from behind by one assassin before being garroted to death. The last thought he had was an apology to Betty, an apology he would never get to offer. The assassins later left Leeds' corpse bound to a chair and gagged for Peter Parker to find.[18]

Despite having affair with Flash Thompson at the time, Betty was traumatized by her husband's death. Her mental condition was damaged; a problem which she couldn't resolve without friends' help.[19] Because Jack O'Lantern (who hired the Foreigner for the hit on Leeds) took over the Hobgoblin identity immediately after Ned's death, Ned Leeds' role as the Hobgoblin was not made public knowledge. Spider-Man and Betty Brant only learned the truth after the fact when the Kingpin and Foreigner, respectively, slipped them the information.[20][21]

Ned Leeds was one of the numerous allies of Spider-Man brought back to life with cloning technology by the new Jackal as an attempt to have Spidey join his cause.[23] During the Jackal's fall, his clones started to decay.[24] As his body was degenerating, Ned managed to call Betty on the phone, leaving in her voicemail a message that finished with him uttering the words "Blood Creek."[25] While Spider-Man managed to stop the clones' decay, and a few survived,[24] including Ned, he decided to keep his survival a secret.

The final words of Ned's message remitted to a case he was working on before his death, the discovery that a statue in City Hall commemorating the never-happened Revolutionary War's Battle of Blood Creek doubled as a powerful bomb planted by the Maggia in case they wanted to target the mayor of New York City. Disguised as a vagabond living in the park, Ned kept an eye on the statue.

With Peter Parker's help, Betty investigated Ned's cryptic message, and ended up discovering the truth behind the statue. She was captured by Ernesto Karnelli, the long-hidden leader of the shadow arm of the Maggia that was going to finally going to make use of the bomb. While he escaped out of the bomb's radius, Karnelli had his butler Renaldo stay behind and activate the bomb manually in case he failed to do so from a distance. Ned confronted Renaldo and together with Betty stopped him from activating the bomb while Spider-Man was dealing with Karnelli. After the villain's plan was foiled, Betty published an article on the truth behind the statue of Blood Creek with Ned's name attached to it. The statue was taken down and replaced with a plaque in Ned's honor. From a distance, Ned observed as Betty, Glory Grant and Peter Parker celebrated the resolution, and ditched his vagabond disguise before walking away.[25]

Sometime after, Ned ended up becoming a vagabond, living life on the streets. He was unwittingly rescued by May Parker just as she was leaving a restaurant when she spotted him being accosted by a bunch of punks. Bringing him into the restaurant for a nice meal, their talks were interrupted when Rhino smashed through, being chased by Taskmaster and Black Ant. When Spider-Man entered the fray, Black Ant used a special weapon to capture Rhino.[26] The patrons inside the restaurant survived the resulting explosion, but when trying to save May from collapsing rubble, Ned was crushed by it instead. Spider-Man rescued him, but was shocked that he was alive, surmising that had had indeed survived the events at New U. With his last breath, Ned begged Spider-Man to protect Betty from something, but couldn't explain before succumbing to his injuries.[27]

When the demonic entity known as Kindred set the stage for his confrontation against Spider-Man, his target of torment, the body of Ned was among those of dead friends and family of Peter disinterred by the villain and placed at a dinning table.[28]

Ned was a veteran reporter.

Like this? Let us know!
Retrieved from "https://marvel.fandom.com/wiki/Edward_Leeds_(Earth-616)?oldid=6494487"
Community content is available under CC-BY-SA unless otherwise noted.