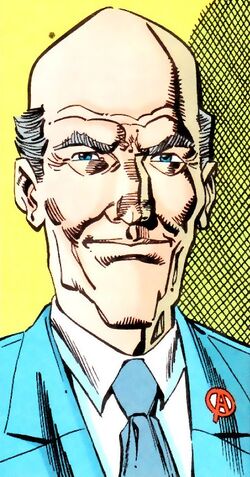 Edwin's life was the same as Edwin Jarvis (Earth-616) up until the point in the Clone Saga during which Mary Jane Watson went into labor early.[citation needed]

After these events and after the original Avengers disbanded, Edwin continued his duties as the Chief of Staff at the Avengers Mansion, which was now being maintained by the Maria Stark Foundation. With the formation of A Next, he took up the tasks he previously performed with the original Avengers.[citation needed]

Seemingly those of Edwin Jarvis of Earth-616.

Like this? Let us know!
Retrieved from "https://marvel.fandom.com/wiki/Edwin_Jarvis_(Earth-982)?oldid=5669213"
Community content is available under CC-BY-SA unless otherwise noted.