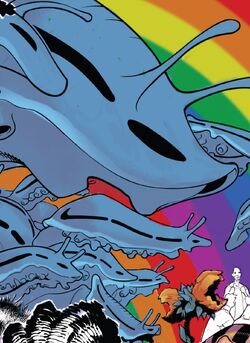 The Een'Gawori are a race of magic-consuming slugs that could be found in abundance in the dimension known as Fandazar Foo. When said plane of reality was razed by the Empirikul and depleted of magic forces, the Een'Gawori began to starve.

They took their chance to enter another dimension when Doctor Strange opened a door from his Sanctum Sanctorum in order to visit Fandazar Foo, and the slugs came out pouring out with such strength, Strange's astral form was knocked down halfway across the city. The slugs quickly infested the city, and started upsetting the ectoplasmic ecosystem.

As he avoided being consumed by the Een'Gawori, Strange made his way back to his Sanctum Sanctorum, and returned to his body. He subsequently released so much mystic force that the slugs were put in a food coma, so they could be dealt with later.[1]

Like this? Let us know!
Retrieved from "https://marvel.fandom.com/wiki/Een%27Gawori?oldid=3753611"
Community content is available under CC-BY-SA unless otherwise noted.