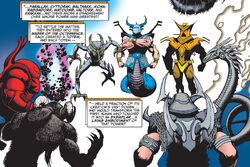 Aliases
Wager of the Octessence

Millennia ago, eight great mystic entities entered into the Wager of the Octessence to determine who among them was the most powerful. Farallah, Cyttorak, Balthakk, Ikonn, Raggadorr, Watoomb, Valtorr, and Krakkan. Each of them created a totem which held a fraction of their vast power, and would transform the first human who touched into an exemplar, a living embodiment of that power. The entities all then had Temples created to house their totems. Once a mortal became an exemplar, a spell would be triggered, drawing others to the temples, creating eight Exemplars in all. Juggernaut was the first, but the spell was disrupted when Cyttorak's Temple was buried under rubble. But now, the Wager of the Octessence starts again.

Retrieved from "https://marvel.fandom.com/wiki/Eighth_Day?oldid=4669533"
Community content is available under CC-BY-SA unless otherwise noted.