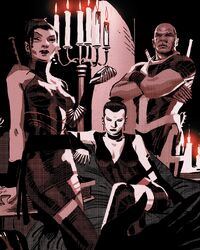 Base of Operations
Temple of the Sheltering Hands, Chinatown, New York City
Affiliations

Allies
Church of the Sheltering Hands

Origin
Select individuals given a portion of Tenfingers' power

The Eights were a select group of individuals within the Church of the Sheltering Hands, who had had a portion of Tenfingers' power bestowed on them. One of the Eights was Lu Wei, the mother of Chinatown vigilante Blindspot.[1]

When a Fist of The Hand attacked Tenfingers to reclaim the power he had stolen from them, he ordered the Eights to kill several of his followers that had witnessed him fail. Blindspot stood in their way to protect the innocents. In the end, as an act of faith, Lu Wei killed her two fellow Eights fighting Blindspot and walked away.[2]

Retrieved from "https://marvel.fandom.com/wiki/Eights_(Earth-616)?oldid=3917803"
Community content is available under CC-BY-SA unless otherwise noted.