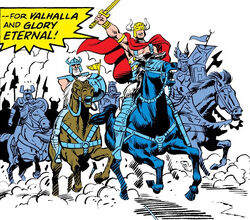 The army of dead warriors who inhabited the mighty hall Valhalla and who pass their time in feasting and continual fighting, as they wait for the final battle at Ragnarok, when they will turn out to fight on behalf of the Aesir.[1]

When Surtur used the Cask of Ancient Winters to cross over from Muspelheim with his demon hordes the Einherjar alongside, the U.S. Military and the Avengers drove them back. The Einherjar were so impressed by modern weapons the military used they took some machine guns back with them.[2]

Later Hela began taking mortal souls to Hel and Thor enlisted the help of the Einherjar to help him stop her. They along with Balder and the Executioner traveled to Hel and after many hardships including an heroic last stand by the Executioner managed to defeat Hela and free the trapped souls.[3]

Like this? Let us know!
Retrieved from "https://marvel.fandom.com/wiki/Einherjar_(Earth-616)?oldid=5546377"
Community content is available under CC-BY-SA unless otherwise noted.