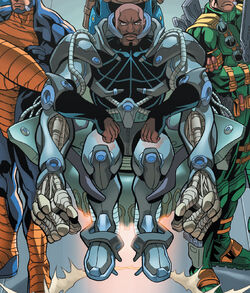 Eisenhower Canty aka Hammer was a mercenary that worked with the Mutant Cable team called the Six Pack. Hammer was part of the team on a mission to steal some data, but they were ambushed by Cable's clone Stryfe.

Stryfe offered a deal to the let the Six Pack go if they gave up the data disc. Hammer wanted to comply with the offer, but Cable shot him in the back to keep the disc in his possession.

Hammer was paralyzed after this incident and recuperated at his mothers home. Hammer resented Cable and tried to join with other former members of the Six Pack so as to kill Cable.

Later, Hammer forgave Cable and reunited with Domino and Grizzly to steal files from Department K.[1]

Like this? Let us know!
Retrieved from "https://marvel.fandom.com/wiki/Eisenhower_Canty_(Earth-616)?oldid=5798526"
Community content is available under CC-BY-SA unless otherwise noted.