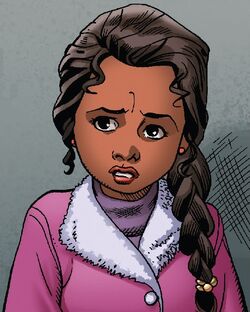 Eleanor Camacho is the daughter of Deadpool and Carmelita Camacho. Eleanor was raised by Carmelita alone as Deadpool had abandoned Carmelita without knowing she was pregnant. Years later, Carmelita managed to track him down and asked for child support, but Deadpool refused to believe such a beautiful child could ever be his.[3]

Eleanor and Carmelita were kidnapped and brought to North Korea by the villain known as the Butler as an "insurance policy" because Deadpool had quit a program led by him.[4]

When Deadpool was kidnapped by the Butler, brought to North Korea himself, and revealed the existence of Eleanor, he tried to find them. After liberating Camp 23 in which Eleanor and Carmelita had been held, he found Carmelita's corpse, but not a trace of Eleanor.[5]

Although it was possible that Eleanor was alive and among the rescued prisoners, Deadpool decided not to track her down, because he didn't want to bring her more pain than that he had unknowingly caused.[4]

When the eye of the deceased Uatu the Watcher was activated, and revealed to anyone near its range the deepest secrets related to them, Emily Preston, a S.H.I.E.L.D. agent and friend of Deadpool who was investigating about Eleanor's fate, had a vision in which she discovered Eleanor was alive, and that she had been given by the Butler to his brother, Joshua, alleging that he had rescued her from an abusive family, to raise her as his own daughter.[6]

Preston kept investigating and discovered Joshua lived in Illinois. She went to his house, and encountered Ellie playing in the backyard.[6] Joshua later encountered Ellie and Preston talking, and asked Preston to leave after she informed him he was there because of a missing person, demanding a warrant for further interrogation. As soon as Preston left, Ellie was told by Joshua that they were going to leave. Ellie requested an explanation from Joshua, but before he could say anything, U.L.T.I.M.A.T.U.M. agents broke into the house.[7]

Joshua and Ellie managed to get out of the house and escape to Chicago by train. When they arrived at their destination, they asked for help from a police officer, who led them to an alley and revealed himself as being an U.L.T.I.M.A.T.U.M. agent whose backup had just arrived. As Ellie was being taken, Joshua suffered from a heart attack. Luckily, Deadpool was disguised as one of the agents and rescued Ellie. Before escaping with the child, Deadpool shot into the air to attract the attention of the Chicago Police Department so they could help Joshua. As they got into a building, Ellie asked if Deadpool was her father.[8]

In the end, Deadpool was cornered by U.L.T.I.M.A.T.U.M. agents, and the Flag-Smasher himself, who, in retaliation for Deadpool's actions, threw Ellie out of a window; however, Evan and Quentin Quire, who were alerted by Deadpool, came to Ellie's aid, and they managed to save her at the last minute.

Deadpool then proceeded to savagely beat the Flag-Smasher, forbidding him from ever threatening Eleanor again. He then enlisted Quentin's help again, this time to have the police coroner declare Eleanor dead.

Ellie, under an assumed identity, was sent to live with Emily Preston's family, with Deadpool content with watching her from afar. Quentin and Evan offered to have Ellie's mind altered to forget her painful ordeal and Joshua's death, but Deadpool refused, letting Ellie's psyche heal in time with the Prestons and his own support.[9]

Under the influence of the eye of the deceased Uatu, S.H.I.E.L.D agent Scott Adsit had a vision from the past of Butler discovering Ellie's X-Gene, which ultimately had led to the events of Carmelita's capture.[2]

When U.L.T.I.M.A.T.U.M. tried to have revenge on Deadpool for destroying their Helicarrier and slaughtering countless of their agents, they tried to kill his allies, including Ellie, by attacking their house; however, they survived the assault thanks to the magic of Michael the Necromancer and escaped to a safe location. After Deadpool retaliated and murdered all of U.L.T.I.M.A.T.U.M.'s agents, he decided to give up his life as Deadpool. As he was celebrating the start of a new life with his friends and family, an Incursion between Earth-616 and Earth-1610 caused the collision and destruction of both universe's planets Earth, with Deadpool and his allies dying in the process.[1]

The Multiverse was eventually restored along with all of its inhabitants, including Ellie.[10] Ellie, Emily, and her family moved to Arizona under witness protection as a result of Deadpool's sky-rocketed popularity,[11] because Wade feared his fame could endanger them.[10] When the villainous Madcap impersonated Deadpool to beat up Scott Adsit, Emily, and her family decided to leave witness protection and help Deadpool,[11] eventually becoming a part of his life once again.[12]

Emily and the Prestons were put in dire risk as part of a revenge plot schemed by Madcap, who had Deadpool unwittingly become the carrier of an airborne virus that infected his family. Deadpool had to resort to Stryfe, the evil clone of his time-travelling ally Cable. Stryfe handed over to Deadpool a cure of Ellie and the Prestons' fatal condition, one that wouldn't exist until the future.[13]

Deadpool fractured his relationship with Ellie when, at the beginning of Hydra's empire, he kidnapped her from the Prestons and took her with him to Washington, D.C..[14] Having become a Hydra operative, Deadpool neglected Ellie, leading her to cause problems at her new school.[15] When Deadpool disappeared for almost a week, Ellie returned to Queens on her own.[16] Having learned that Deadpool killed Emily, Ellie and what remained of the Preston family left New York City to escape from Wade.[17]

Though they parted on bad terms, Ellie was shown to have forgiven her father. She ran into him on a class trip, but due to mind-wiping himself, he did not recognize her. Despite this, she followed him on one of his missions and tried to prevent him from killing his target -trying to show he was a better man than that.[18] She was later seen watching her father's confrontation with an enemy on the news. As Wade sat complete shattered, Ellie began to tear up before putting away her iPad and falling asleep.[19]

When Mephisto and Weasel went after Ellie, Wade regained his memories. He was shown a vision of the future where Ellie became a hero in the year 2099. Mephisto warned Deadpool that should he not cooperate, Ellie would be mentored under Tasmanian and end up becoming his soul collector, carrying out the job Deadpool refused. Wade refused to let it happen and travelled back to stop Tasmanian from taking Ellie. After defeating him, Wade hugged Ellie and said his goodbye to her again. Though she wanted him to stay, Wade told her that sometimes one really can't go home again. He left with Mephisto as Ellie went back her home inside with Preston.[20]

Like this? Let us know!
Retrieved from "https://marvel.fandom.com/wiki/Eleanor_Camacho_(Earth-616)?oldid=6474853"
Community content is available under CC-BY-SA unless otherwise noted.