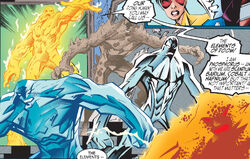 The Avengers encountered a hostile group of alien invaders at a Russian nuclear facility. The aliens supplanted human beings with energy constructs based on elements in the periodic table. The Avengers defeated the elements and buried them under a mass of molten stone and steel. The reactor later experienced a meltdown and the entire facility was sealed in cement as a safety measure.[1] Later, Diablo broke the dimensional barrier with his arcane knowledge bringing the creatures back to life forming an alliance with the goal of dominating the world.[2]

A later incarnation of the team, created without using human hosts fought the Thunderbolts. One of them killed Techno by snapping his neck.[3]

Like this? Let us know!
Retrieved from "https://marvel.fandom.com/wiki/Elements_of_Doom_(Earth-616)?oldid=6432187"
Community content is available under CC-BY-SA unless otherwise noted.